Tesla’s Next Car Could Support Ultra Wideband Unlocking With iPhone

A leaked Tesla FCC document shared by The Verge suggests that Tesla’s next cars will support Ultra Wideband, a technology that’s built into the latest iPhones and in vehicles, allows for greater accuracy when unlocking a car with a smartphone. 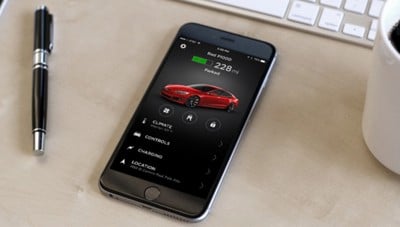 Tesla in September submitted documentation on new key fobs, a controller, and endpoints that would be installed inside the frame and cabin of a vehicle, some of which support Ultra Wideband communication. Tesla is using a standards-based implementation of Ultra Wideband, so it should be compatible with the iPhone 11 and iPhone 12 models that support the technology if it ultimately ends up in Tesla vehicles.

Apple’s ‌iPhone 11‌ and ‌iPhone 12‌ devices are equipped with a U1 chip that supports Ultra Wideband technology for improved spatial awareness and indoor location detection. Apple has likened Ultra Wideband to “GPS at the scale of the living room,” and it is designed for accurate close proximity tracking.

Right now, Apple is using the U1 chip for a directional AirDrop feature and to interact with the U1-equipped HomePod mini for handing off songs, but it otherwise doesn’t do much. In the future, Apple is expected to use the U1 chip for AirTags, and it also has applications like integration with vehicles.

There’s no explicit word that Tesla’s Ultra Wideband implementation will work with the iPhone, but Tesla already has an iPhone app that allows Tesla owners to lock and unlock their cars, among other features. According to the FCC document, Tesla’s Ultra Wideband feature will more accurately determine how far a person is from their car for unlocking and activation purposes, and Tesla describes it as more secure.

Future Tesla vehicles will include several Ultra Wideband endpoints in the vehicle for proper location triangulation and to determine whether a person is inside or outside of the car, and these will likely be able to interface with Apple’s iPhones.

Other vehicle manufacturers are also working on Ultra Wideband technology that will work with the ‌iPhone 11‌ and ‌iPhone 12‌ models. In January, BMW said that it is working on Digital Key Plus, a new Ultra Wideband version of the Apple Car Keys feature that is designed to allow drivers to unlock and start their vehicles without removing their ‌iPhone‌ from their pocket or bag.

BMW’s Ultra Wideband technology will be built into the iX electric vehicle set to launch in Europe in late 2021 and in North America in early 2022.