Samsung has confirmed it will be launching the Galaxy F62 in India on 15th February and the smartphone will be a Flipkart exclusive.

Samsung Galaxy F62 is arriving in India on the 15th of February at 12 Noon. The smartphone will be sold exclusively through Flipkart and it is teased with the hashtag ‘#FullOnSpeedy’.

The launch teaser by Samsung India also confirms the device will be powered by the Exynos 9825 which according to Samsung is a 7nm flagship processor. This has already leaked in the past and now the rumours seem to be true. The price for the phone has already been tipped to be under Rs 25,000. 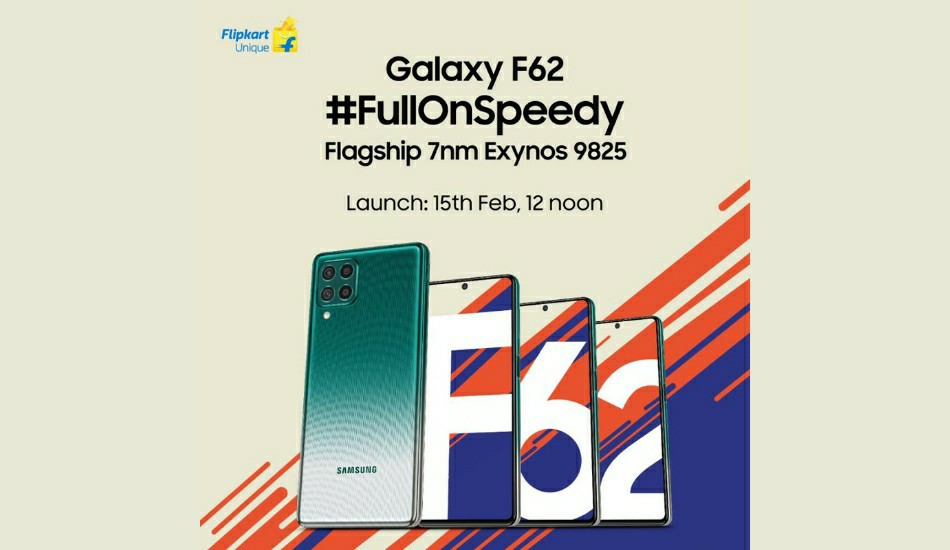 Not only this but the rear design of the smartphone that has been revealed shows off a quad-camera setup on the back housed in a swuare array. It will come in a green-ish gradient colour and also on the front, will have a centered punch-hole type selfie camera.

The Samsung Galaxy F62 is expected to be backed by a huge 7,000mAh battery along with a bigger display than its predecessors.

The Galaxy F62 bearing the model number SM-E625f will sport a 6.7-inch sAMOLED display, as per the report. The smartphone will be made available in 2 colours including blue and green. The device will be powered by a 7nm Exynos 9825 chipset.

The processor will be paired with 6 gig of RAM and 128 gigs of Internal storage. On the rear, the device should sport a 64MP quad-camera setup while the details for the 3 remaining sensors are still under the wraps. The device will have a 32MP camera on the front for selfies and will run on Android 11 based on OneUI 3.0/3.1.

There are no official details available at the moment regarding the pricing and specifications of the device but we expect to learn more in the upcoming weeks.