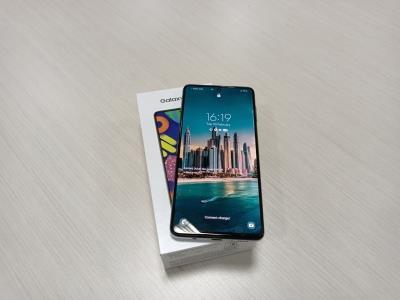 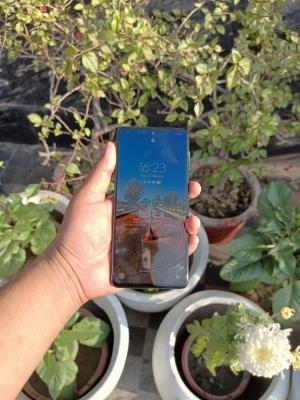 Galaxy F62 promises to deliver the best of Galaxy M51 with even better performance.

Several other features are similar to M51, including a 7,000mAh battery with 25W fast charging.

We used the top-end variant for few days and here’s how it fared.

Samsung Galaxy F62 comes in a combination of glass and plastic on its back along with a quad-camera setup on the top left and branding on the bottom. It has vertical lines running across the rear panel and has a reflective finish.

On the front, there’s a punch hole notch on the top that houses the selfie camera. The SIM slot is placed on the left edge and volume keys and a side-mounted fingerprint scanner on the right edge. There’s a 3.5mm jack, a Type-C port and a speaker grille on the bottom edge.

Overall, the smartphone looks classy but it may also attract fingerprints and smudges.

The smartphone features a 6.7-inch FHD+ Super AMOLED Plus Infinity-O display with a peak brightness of 420 nits and a contrast ratio of 1000000:1 and a punch hole notch. The display is bright and has vivid colours and deep blacks. It performed perfectly under both low light as well as direct sunlight.

The smartphone sports a quad-camera setup on its rear panel along with a LED flash. It has a 64MP primary camera, a 12MP ultra-wide unit, a 5MP macro unit and a 5MP depth sensor.

The front has a 32MP selfie camera that too performed well as it delivered decent images under good light conditions.

Both the cameras come with 4K video recording support. The company has also provided a list of proprietary camera features, including ‘Single Take’ to produce up to 14 different outputs.

The Samsung Galaxy F62 ships with the company’s flagship 7nm Exynos 9825 processor and this is one of the star attractions on this phone. The phone did not lag while gaming online and offline.

Conclusion: With the launch of Galaxy F62, Samsung is set to strengthen its position in the mid-price segment. The flagship Exynos 9825 chip that powered the Galaxy Note 10+ and a massive 7,000mAh battery is all that your need to give this phone a must try.

(Vivek Singh Chauhan can be reached at )


Legal Disclaimer: MENAFN provides the information “as is” without warranty of any kind. We do not accept any responsibility or liability for the accuracy, content, images, videos, licenses, completeness, legality, or reliability of the information contained in this article. If you have any complaints or copyright issues related to this article, kindly contact the provider above.

Quill launches as a team messaging antithesis to Slack

Quill launches as a team messaging antithesis to Slack